Heavy winds and lightning have resulted in several power outages throughout the city with extensive damage to our infrastructure. We are currently experiencing multiple outages affecting more than 72,000 customers. The situation remains complex.

Crews are working diligently to ensure public safety and restore power as soon as possible. Restoration is expected to extend across multiple days. Power will be restored initially to large scale outages, followed by smaller ones, keeping safety as the number one priority.

If you see a downed power line, stay at least 10 meters (the length of a school bus) away from the wires and from any objects that are in contact with the lines.

Crews continue to repair equipment and restore power to customers across the city. If you are experiencing an outage, please call 613-738-0188.

Hydro Ottawa Holding Inc. (Hydro Ottawa) is a private company, incorporated under the Business Corporations Act (Ontario). At the same time, the company is wholly owned by the City of Ottawa and fulfills a public mandate, and is therefore mindful of its responsibility to be accountable both to its shareholder and the public. The company's governance practices are guided not simply by legal obligations, but by best business practices and standards established by independent agencies.

While Hydro Ottawa is not a reporting issuer under the Securities Act, and is therefore not subject to governance standards that apply to publicly-traded companies, the company is guided by these standards and seeks to meet or exceed them. In addition, Hydro Ottawa regularly compares its governance practices to those of private and public sector organizations, and to standards set by agencies such as the Canadian Securities Administrators and the Ontario Securities Commission.

Accountability for the effective oversight of the Corporation and its subsidiaries rests with an eleven-member Board of Directors, which provides direction to the Corporation on behalf of the shareholder, the City of Ottawa.

The Board provides leadership for the company within a framework of effective controls that enables risks to be assessed and managed, and is responsible for supervising the management of the business and affairs of the company and its subsidiaries. In carrying out its oversight function, the Board of Directors is guided by a Shareholder Declaration issued by Ottawa City Council and revised from time to time. The company's Code of Business Conduct, its Director Conflict of Interest and Conduct Guidelines and a Related Party Transaction Disclosure Policy and Process also govern the actions of the Board.

In 2006, a separate Board of Directors was established to oversee the operations of Hydro Ottawa Limited, in accordance with the Affiliate Relationships Code for Electricity Distributors and Transmitters issued by the Ontario Energy Board. The powers and functions of that Board are set out in a Shareholder Declaration issued by the Hydro Ottawa Holding Inc. Board of Directors. A majority of the members of both Boards are independent of management and the shareholder. 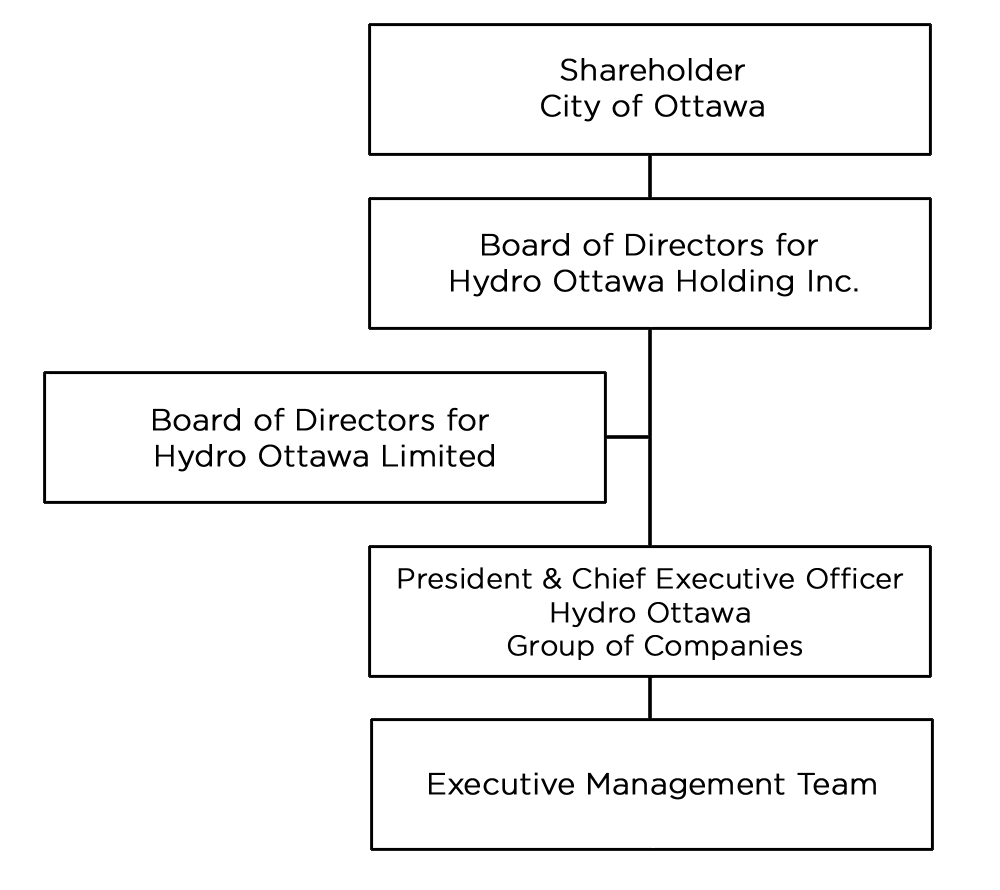